Let’s face it, the only people who like Donald Trump as president are the rednecks and the Russians who got him in the White House. Americans with good moral values cannot stand the man and they have found a creative way to show their frustration with him.

Ever wanted to say “F U” to someone but had to bite your tongue? Well these new T-shirts design gives you a unique way to say “F@ck Trump”. They are the “Fump Truck” t-shirts, where Fump Truck is Donald Trump’s version of dump Truck. Think of scrabble and a play on Trump’s name. 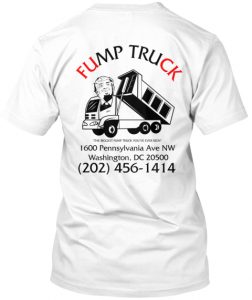 So the shirt is actually saying “Fuck Trump”, however, the “ck” in fuck and the “mp” in Trump are trading places to form “Fump Truck”.

The design actually shows president Trump driving a dump truck. Fump Trump is actually depicted as one of Donald Trump’s companies with white house’s address and phone number listed on the business card.

Trump’s approval rating is at an historical low compared to any other president in the history of the United States. Whether it’s his bigoted banning of Muslims or his hatred for foreigners overall, Trump has turned America into a melting pot of racial and religious hatred. If you’re one of the many unhappy Americans who cannot wait for him to be out of office, show your feelings everywhere you go and get your “Fump Truck” T-Shirt today.

Donald Trump threatens to bring in Military to shoot protesters who loot.

“These THUGS are dishonoring the memory of George Floyd, and I won’t let that happen. Just spoke to Governor Tim Walz and told him that […]

While Donald Trump is celebrating white supremacy at Mount Rushmore, it is being revealed that his eldest son’s girlfriend, Kim Guilfoyle, has tested positive for […]

Ziggy Marley has made it clear that he will always support Israel no matter what anybody says or does. This is despite the fact that […]